Today 10 August the church celebrates the martyr, Deacon Laurence.  In our intercessions,  Christians like him are to be remembered,  still being captured, unjustly tried, robbed of possessions, and made to suffer ghastly deaths.

Lord, have mercy:  and grant us the grace, courage and humour of Laurence. 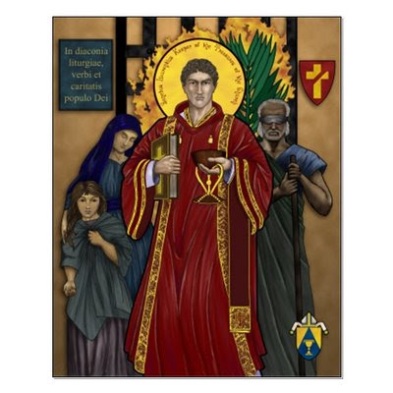 Laurence or Lawrence (about 225-258) was one of the seven deacons of ancient Rome who were martyred under the persecution of Valerian (emperor 253-260) in 258.  After Sixtus was elected bishop on 31 August 257, he ordained Laurence a deacon and placed him in charge of the administration of church goods and care for the poor.

In the persecutions under Valerian, numerous presbyters and bishops were put to death.. Sixtus II was one of the first victims, beheaded on 6 August 258. According to a legend cited by Ambrose of Milan, Laurence met Sixtus on his way to execution, and said: “Father, where are you going without your son? Holy priest, where are you hurrying without your deacon?”

Sixtus answered: “I am not leaving you or forsaking you. Greater struggles yet await you. We old men have to undergo an easier fight; a more glorious triumph over the Tyrant awaits you, young man. Don’t cry; after three days you will follow me.”

After the death of Sixtus, the prefect of Rome demanded that Laurence turn over the riches of the church. Ambrose is the earliest source for the tale that Laurence asked for three days to gather together the wealth. Laurence worked swiftly to distribute as much church property to the poor as possible, to prevent its being seized by the prefect.

On the third day, at the head of a small delegation, he presented himself to the prefect. When ordered to give up the treasures of the church, he presented the poor, the crippled, the blind, and the suffering, and said that these were the true treasures of the church. One account records him declaring to the prefect, “The church is truly rich, far richer than your emperor.” This act of defiance led to his martyrdom. It is said that Laurence was burned on a gridiron or “grilled” to death. According to legend, at the point of death he exclaimed, “I am done on this side! Turn me over and eat.” (More likely, he was beheaded like his bishop and fellow deacons.)