7 steps to become a Church of and for the poor

From a talk by Philip North, Bishop of Burnley at New Wine United 2017

In his talk at New Wine, entitled, “Hope for the Poor”, Philip North, Bishop of Burnley, pointed out that we are seeing the slow and steady withdrawal of church life from those communities where the poorest people in our nation live. Despite a renewed passion for evangelism, dioceses having growth strategies, church planting and money released for mission over the past 20 years, the impact has been decline. Whilst acknowledging the effort that is going in, he suggests the answer to such decline is a straightforward one. It’s because we have forgotten the poor.

He continues as follows:

“Every effective renewal movement in the whole history of the Church has begun not with the richest and most influential, but with the poor and the marginalised. ‘I have come to proclaim good news to the poor’ Jesus said in the synagogue at Nazareth. How often have you seen those last three words ‘to the poor’ omitted or re-interpreted or spiritualised? But when Jesus said ‘poor’ he meant ‘poor, and he demonstrated that in the way he lived the rest of his life.”

The early church was an example of the church for the poor and Philip then gives other examples – 3 of which are as follows:

“When the Roman soldiers came to arrest St Lawrence during the persecution of Diocletian in 304AD and demanded to see the riches of the Church, he took them out into the streets and showed them the poor and the crippled and the lame. ‘Here is our gold’ he told them. A great line, but it got him cooked on a griddle. Church for the poor.

“When St Francis heard his call to rebuild the church which had fallen into corruption he called into community the illiterate and the uneducated, he gave them clothes to wear and food to eat and urged them, through their simplicity, to model the way of Christ and they began a potent movement of reform that left monarchs quaking and powerless. Church for the poor.

“When Vincent de Paul wanted to renew a wholly decadent and derelict French church in the seventeenth century, he bypassed his aristocratic connections and went instead to the galley slaves and the prisoners and the destitute and unchurched citizens of the new cities. He organised communities of priests and sisters to serve and proclaim and the result was a renewal which swept across France and overseas and was one of the great inspirations behind the Catholic renewal in this country in the nineteenth century. Church for the poor.

Philip then suggests seven steps that will help us to become a Church of and for the poor that the world might believe. These are summarised as follows:

2. Leadership.
We need to raise up leaders in, for and from the urban church. The best person to speak the Gospel into an urban estate is someone who has grown up there, so we need to be courageous and take risks in raising up a local leadership. Catapulting in white, well-educated, beautiful people from the nice bit of town will dispossess and disempower local residents. The impact will be to take their church away from them such that the church will become just another service provided on their behalf by patronising outsiders. And to raise up this new generation of leaders, we need our best clergy to commit significant periods of their ministries to the poorest areas. 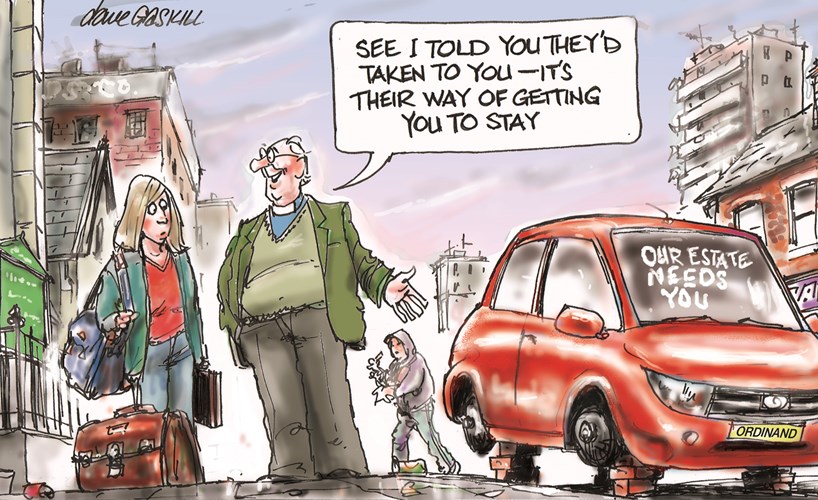 3. The church-planting movement needs to put the poor first rather than last.
Too many church planting strategies are aimed at the low-hanging fruit in fast regenerating urban areas or university towns. Renewal comes from courageous mission to the places where it’s toughest. If you feel called to plant, we need you on the outer estates, we need you in our northern towns, we need you in areas where a majority of people come from other world faiths, we need you in those areas where the trendy coffee shops and artisanal bakers are hard to find.

4. Marry together service with proclamation.
If all we do is proclaim and ignore the hard reality of people’s lives, if all we offer is Jesus the living bread when they need real bread to put in their stomachs, no one will listen. On the other hand if all we do is serve and not proclaim, as many churches do, we are subjecting people to the greatest deprivation of all which is to be deprived of ever hearing the saving news of Jesus Christ. A feature of all growing urban churches is an intentional marriage of service and proclamation.

5. Patient presence.
We have become obsessed with the quick win. Urban and estates ministry is hard work and slow going. It takes years to become established, to win trust, to learn the questions, to form leaders, to work out how best to serve, to discern accessible ways of proclaiming, to win souls for Christ. And there will be many setbacks along the way, many leaders we form who move away, many families we work with who for no good reason disappear, many projects and initiatives we attempt that won’t get off the ground. That can be hard. But it’s real and it’s true and it’s the Gospel. Think of St Paul. He endured countless setbacks, there were arguments, there were places he could not enter. At one point he speaks about being ‘unbearably crushed.’ This is real Christian ministry. It is cross-shaped, it hurts, it’s sacrificial.

6. Everyone’s concern and everyone’s problem.
If the Church wants to be present in places of poverty, it is no good to leave it up to a few heroic church leaders whilst the rest of us get on with our ordinary lives. The wider Church must support the church in urban areas, and do so in genuine and concrete ways. That means financial subsidy, it means letting go of its best leaders for urban ministry, it means support and prayer and encouragement, it means a willingness to listen to the urban church and amend its own life and structures accordingly.

7. Prayer.
We need sincere, disciplined, authentic prayer because it is only through prayer that the Lord will soften our hearts and open our ears to the cry of the poor. Pray for the church in areas where it is hard to be the church. Pray for yourself so that you can discern how God is calling you to proclaim Good News to the poor.

Philip concludes by saying, “I believe there is change, there is a new openness to being a Church of and for the poor. There are a number of new and interesting initiatives and ideas, some significant books are starting to appear such as ‘A Church for the Poor’ by Martin Charlesworth and Natalie Williams. Pope Francis has reawakened many to centrality of this area of Christian ministry. But it is not enough. And it is not fast enough. We know the stats. Within 10 years we will have all but lost the Church in the poorest areas. We will have become a complacent, smug church of and for the rich.”

From a talk by Philip North, Bishop of Burnley at 08/08/2017
https://www.wordonthestreets.net/Articles/503680/7_steps_to.aspx?utm_content=buffer1c554&utm_medium=social&utm_source=twitter.com&utm_campaign=buffer