Today is the feast day of Vincent of Saragossa.

The deacon Vincent’s fearless manner so angered the governor that he was tortured and killed at Valencia. He was the earliest of the Spanish martyrs.

Summary of St Vincent, Deacon, Martyr.Vincent died in 304, martyred in Valencia (Spain) during the persecution of the emperor Diocletian. A deacon of Saragossa. His cult spread rapidly through the whole Church of the West. Honoured as the first martyr of Spain.

Interestingly, this image comes from The Drinks Business! *[

Three martyred deacons were given special honour in the early centuries of the Church: Stephen in Palestine, Lawrence in Rome and Vincent in Spain. Vincent is the earliest Spanish martyr whose name is known to us. Patrick Duffy tells what is known about him and his cult. 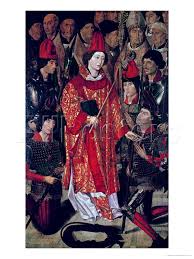 His life and death 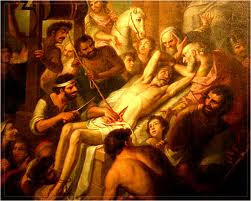 Vincent served as the deacon of Saint Valerius, bishop of Saragossa. His fellow Spaniard Prudentius (348-405) wrote a poem commemorating his life and death, telling how he was brought to trial along with his bishop Valerius. Valerius had a speech impediment, so Vincent spoke for both. His fearless manner so angered the governor that Vincent was tortured and killed at Valencia, while Bishop Valerius was sent into exile.

His cult spreads in Spain, France and England
Prudentius’s poem and four homilies preached by St Augustine on his feastday show that Vincent’s fame had spread “throughout the Roman empire and wherever you find the name Christian”. Though Vincent’s tomb in Valencia was the earliest centre of his cult, he was also honoured at Saragossa. The eighth century city of Oviedo in Asturias in northern Spain grew up around a church dedicated to Saint Vincent.

Honoured at Cordoba
When the Catholic bishops of Visigothic Iberia succeeded in converting King Reccared (586–601) and his nobles from Arianism to Trinitarian Christianity they built the cathedral of Córdoba in honour of St Vincent the Deacon. Later under the Moors this became the Mezquita, the “Great Mosque” of Córdoba.

In Paris
In 531 Childebert I (496–558), the Frankish king of Paris, was besieging the city of Saragossa. From there he took what was said to be Vincent’s deacon’s tunic (or stole) and brought it to Paris where he built the famous monastery of St Vincent in honour of it at the gates of Paris. This later was changed to the famous church of St Germain-de Prés. Vincent’s cult also spread to England where there were several churches in his honour.

To Portugal and Africa 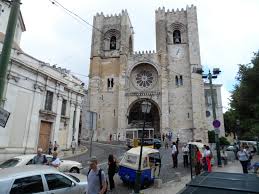 Another tradition holds that Christians, to escape the persecution of a Moorish king at Valencia, took the body of St Vincent with them first to the Algarve and that finally King Alphonsus Henry in 1139 had it brought by sea to Lisbon. Since then an annual feast to celebrate the translation of his body is celebrated in Lisbon on 15th September each year. Visitors to the cathedral there can see evidence of the honour in which he is held – statues and stained glass windows. The Cape Verde island of São Vicente, a former Portuguese colony, was named to honour him.

Patronage*
St Vincent the Deacon is also the patron of vintners and vinegar-makers.