Last week General Synod backed a drive to create new churches on estates throughout the country.  This movement has been growing for some time:  see https://estatechurches.org/

and it was good to see it receive overwhelming support, especially as this challenge is very close to the serving, risk-taking and radical hearts of deacons.

However, the charismatic Bishop Philip North did not pull his punches when he spelt out the sacrifices it would mean for existing churches and parishes.  I reproduce his opening address to synod in full, and commend it to you for its clarity, passion and practicality. 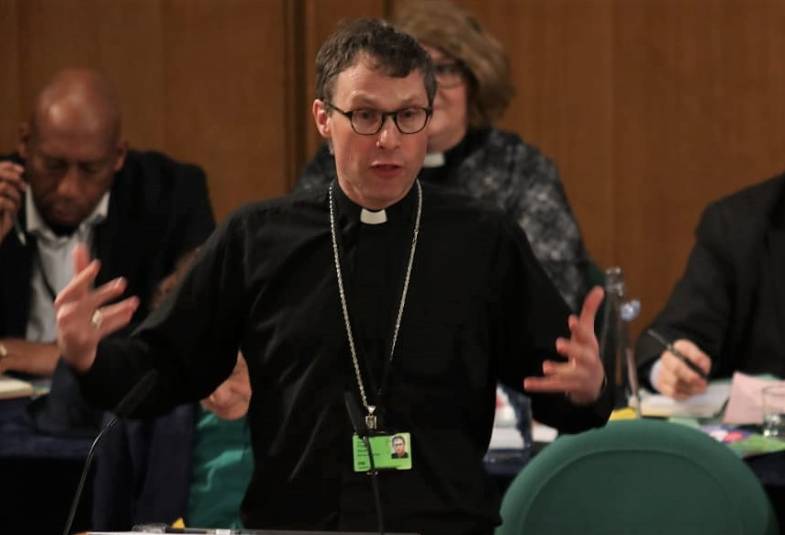 Most people, when introducing a Synod motion, try to whip up votes in favour. I am going to reverse that custom by asking you to vote against.

It would be very easy to nod through a motion on estates evangelism because it ticks so many fashionable boxes. In fact there’s something in it for everyone. We’ve got evangelism for the evangelicals, the social Gospel for the liberals and the bias to the poor for the Catholics. All we need is some loud-mouthed rhetorical speeches to clap and we can click the green button on our voting machines and head for the bar. Estates evangelism, it’s a shoo-in isn’t it? Well think again. I want you to vote this motion down and vote it down decisively if you are not up for the implications.

When the early apostles set out of fulfil their task of growing the church, they started with the hungry and the widowed and the slaves. When St Francis set about rebuilding the church in the twelfth century, his first move was to go and live with a colony of people with leprosy. When St Vincent de Paul felt his call to renew a tired and corrupt French church in a deeply hierarchized society, he began with galley slaves and prisoners. I could go on but already the lesson is clear. Anyone who is serious about the proclamation of the Gospel starts with the poor.

That is the contention of this motion. The Estates Evangelism Task Group is not trying to start a competition. We are not saying that urban estates matter more than the suburbs or the countryside. We are not denigrating any areas of ministry because, of course, we need the church in every place and for every person. We are not a social policy or campaigning group. Our interest is evangelism. And as such we want to remind the church of a truth which is firmly rooted in the scriptures and the tradition. If we want to see a nation coming back to Christ, it will begin amongst the poor. And where today do we find the places of greatest deprivation? Our urban estates.

Those estates were built with great optimism and the first generation of residents were overjoyed at what was being provided. In many ways they are still joyful places to live and to minister. My years working on estates, especially in the north-east, were the happiest of my ministry.

But today, for many estates residents, life is hard and getting harder. What must seem like the modern day four horsemen of the apocalypse – universal credit, low-paid work, food poverty and austerity – plague many lives. Too often services, voluntary organisations and traditional forms of association have been closed down or privatised and along with them have gone the places that form local leaders. Just like austerity, the UK’s departure from the European Union is likely to have a disproportionate impact on urban estates, especially in the short-term. And the church’s response? Bit by bit, almost unseen we have been pulling away, closing churches, withdrawing clergy. We invest far less in ministry on the estates than in any other context. The harvest is rich, but the labourers have been redeployed.

So here’s the vision. It’s a very simple one. To have a loving, serving, worshipping Christian community on every significant social housing estate in the nation. To plant back in the estates we have abandoned, to better support our presence in the places where we’re struggling. If we can do that, the impact on church and nation will be transformative. As Christians we will be seen to be doing what we are called to do which is to share good news with the poor. We will release unlikely leaders and evangelists who will speak the Gospel in a language that people can understand. We will develop evangelistic resources and approaches that will work anywhere. We will for once be working with the grain of cultural transference, because history shows that if you start with the poor, eventually the rich catch on.

And don’t think this is an impossible pipe dream. In recent years I have been blown away by some of the work taking place on our estates. The evidence is that joyful, relationship-based evangelism rooted in belonging can grow incredibly precious Christian communities. Some Dioceses are committing significant time and effort to this and the Strategic Development Fund has put resource behind imagination.

So the question we need to answer today is a simple one. Are you prepared to buy into the vision that lies behind this motion – a church on the side of the poor, a Christian community on every estate? And please I urge you, don’t vote yes if you mean no. Because there are challenging implications.

Voting yes will impact every single parish because many parishes contain forgotten estates, others will want to twin with an estates parish and most will feel financial implications. It will affect every Deanery because all too often the conclusion of Deanery Plans has been that the post or parish that can disappear is the one that serves the outer estate. It will affect every Diocese because the motion asks Dioceses to build estates into their strategic plans and vision. It will present personal challenges to clergy because we need our best priests to be spending at least part of their ministry in areas of deprivation. It will affect this Synod, a place where estates voices are rarely heard with the consequence that our policy decisions can adversely impact the poor. It will affect those who select and train clergy and lay ministers because those from non-professional or unlikely backgrounds have for too long been systematically excluded from leadership in the Church. It will present awkward challenges to those sitting on historic assets because it will require a spirit of generosity within and between dioceses. If you’re not up for these implications, just vote no.

The paper in front of you lays out as clearly as possible how the Estates Evangelism Task Group is seeking to go about its work. But what brings change is not policy decisions and papers but transformed hearts. The details of strategy matter less than the big picture.

Because I am utterly convinced of two things. First, that the renewal of Christian life in our nation is not just possible, it is inevitable. I don’t know how, I don’t know when. But I know it is inevitable because Jesus is Lord, and since he is Lord a distracted nation will one day discover anew his beauty and his truth. And second, that renewal will begin (as it always does) with the poor, with the marginalised, with the forgotten and the oppressed and the broken. That is where the Holy Spirit will one day move, and move with power. The only question left is this. Will the Church of England be there to join in?