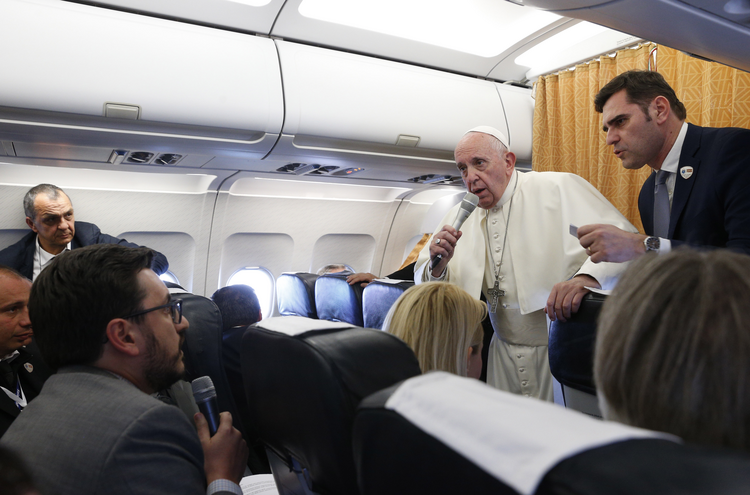 Pope Francis with reporters aboard his flight from Skopje, North Macedonia, to Rome on May 7, 2019. (CNS photo/Paul Haring)

In a press conference on the flight from Skopje to Rome, Pope Francis revealed that the commission he set up two years ago to examine the role of women in the early church did not reach agreement on the question of women deacons. He said the members of the commission had quite different positions, and after two years it stopped work. He made clear that the issue needed further study but did not say who would do this work.

Francis spoke for around 27 minutes answering four questions, two of which were on the visit to Bulgaria and North Macedonia, asking what he thought of both countries and what he took away from the visit. A third related to the divisions among the Orthodox Patriarchs and what is happening regarding the process for the canonization of Cardinal Stepinac given that the Orthodox are against it.

Regarding the question of women deacons, it was noted by the questioner that the Bulgarian Orthodox Church has women deacons to proclaim the Gospel. He was reminded that he will soon meet the International Union of Superiors Generals (who raised the question three years ago), and the pope was asked what he has learned from the report of the commission on the ministry of women in the early church and if he had made a decision on the female diaconate.

(The following is a working translation that may be subject to revision when the Vatican releases a definitive transcript.)

Pope Francis said that commission members “all had different positions, sometimes sharply different, they worked together and they agreed up to a point. Each one had his/her own vision, which was not in accord with that of the others, and the commission stopped there.” He described the contrasting conclusions drawn by members of the commission as “toads from different wells.”

Pope Francis said, “There were deaconesses at the beginning [of the church], but [the question is] was theirs a sacramental ordination or not? They helped, for example, in the liturgy of baptism, which was by immersion, and so when a woman was baptized the deaconesses assisted…. Also for the anointing of the body.”

“A document was found,” he said, “which shows that deaconesses were called by the bishop when there was a marriage dispute for the dissolution of the marriage. The deaconesses were sent to look at the bruises on the body of the woman beaten by her husband. And they gave testimony before the judge.” But, the pope said, “there is no certainty that theirs was an ordination with the same formula and the same finality of the male ordination.”

“Some say there is a doubt,” he said. “Let us go forward to study [the women’s diaconate]. I am not afraid of the study. But up to this moment it has not happened.”

Moreover, Pope Francis said, “it is curious that where there were women deacons it was always in a geographical zone, above all in Syria.”

Francis said, “I received all these things from the commission. It did a good job and this can serve to go forward and to give a definitive response, yes or no” on whether their ordination is the same as that for men deacons.

At a May 2016 meeting with the women’s International Union of Superiors General, leaders of women’s religious orders, one of them had asked the pope, “What prevents the church from including women among permanent deacons, as was the case in the primitive church? Why not constitute an official commission to study the matter?”

The pope had told the sisters that his understanding was that the women described as deaconesses in the New Testament were not ordained like permanent deacons are, however, the pope fulfilled a promise to set up the commission on the issue. Two of the scholars on that commission reported in January that they had completed their work.

Those commission members spoke with America in January. Phyllis Zagano, an author and professor of religion at Hofstra University, and Bernard Pottier, S.J., a faculty member at the Institut D’Études Théologiques in Brussels, said then that they could not comment on the commission’s findings. But they reported that, according to their research, women served as deacons in Europe for about a millennium in a variety of ministerial and sacramental roles. “They anointed ill women; they brought communion to ill women,” said Ms. Zagano.

Father Pottier said then that he was able to find strong evidence of women deacons in church records and histories, but “not everywhere and not always because it was also a choice of the [local] bishop.”

The pope did not tell reporters what steps, if any, would come next on the subject of a women’s diaconate.

He told reporters, “Today, no one says so, but 30 years ago some theologians were saying that there were no deaconesses because women were in second rank in the church and not only in the church.” But, Francis said, “this is curious because in that epoch there were many pagan priestesses; the female priesthood in pagan cults was something usual.”

The pope concluded, “We are at this point, and each of the members is studying his/her own thesis.” There is a “varietas delectas (joyful variety).”

4 thoughts on “ROMAN CATHOLIC WOMEN DEACONS? NOT YET”