Last year there was a major ecumenical gathering in Canada on the diaconate.  The papers have now been collected into a book, as promised, which will be published on 1st August.  However it’s  possible to pre-order a copy now.  This is the most significant publication on the diaconate to emerge for a long time.  I encourage you not only to order a personal copy, but to alert your DDOs, and also your heads of ministerial training, suggesting they get a copy for their theological library.

The Diaconate in Ecumenical Perspective 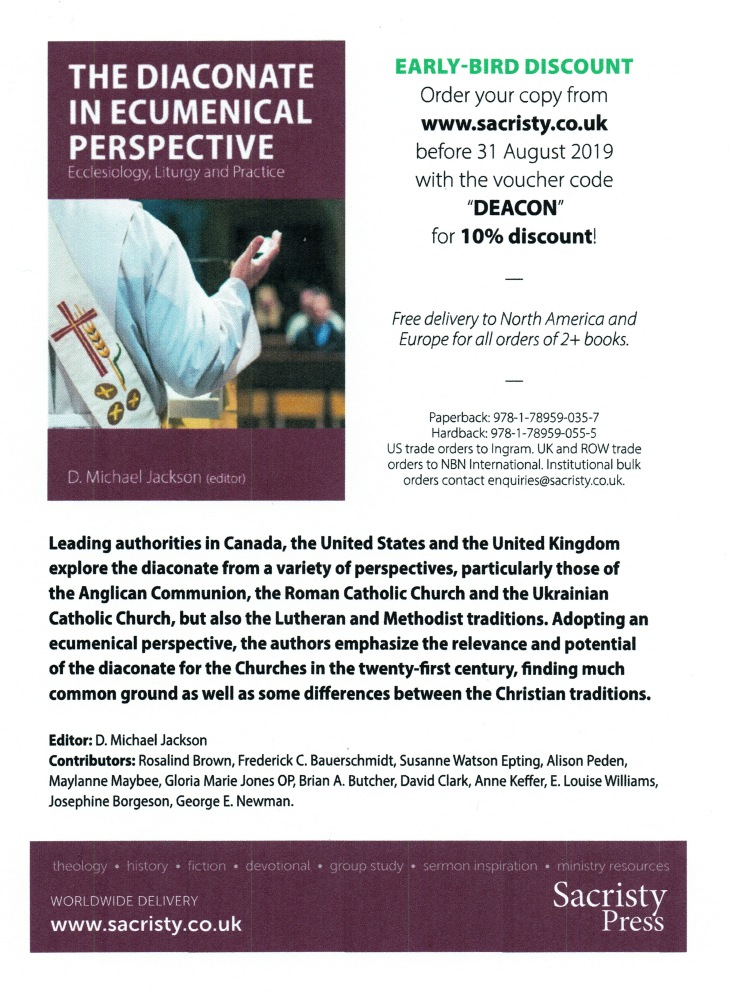 Pre-order this title now and it will be sent to you as soon as it is published. The retail price of the book has not yet been finalised, but if you pre-order today we guarantee that you won’t pay more than £19.99, and if the price reduces before release we will refund the difference.

Looking for the e-book?

These details are provisional until the book is published.

Permission must be requested to reuse any content from this book.

Christian Churches, East and West, especially in the past fifty years, have revived the diaconate as a permanent form of ordained ministry rather than a brief stage on the way to the presbyterate. These essays examine this development from the perspectives of history, theology and practice, showing ecumenical convergence on the renewal of an ancient order. Contributors from Anglican, Roman Catholic, Ukrainian Catholic, Lutheran and Methodist perspectives explore and emphasize the relevance and potential of deacons for the Church today. As well as significant differences, there is much common ground between the traditions. The essays explore subjects such as the retention of the transitional diaconate, women deacons, and the prophetic ministry of the diaconate, as well as the liturgical role of the deacon.

Contributors from the UK, the US and Canada engage in constructive ecumenical theological discussion that offers a fresh and important contribution not only to the study of the diaconate but to ecumenism in general.

Ordained to the diaconate in 1977, D. Michael Jackson is the longest-serving deacon in the Anglican Church of Canada. He is author of two studies on the diaconate, The Diaconate Renewed: Service, Word and Worship and The Deacon in the Worshipping Community, coordinates an international network of Anglican and Roman Catholic deacons, and is a frequent reviewer of diaconal publications.  He serves as a deacon at St Paul’s Cathedral in Regina and is a canon of the Diocese of Qu’Appelle.

Frederick C. (Fritz) Bauerschmidt is a deacon of the Roman Catholic Archdiocese of Baltimore (ordained 2007) and Professor of Theology at Loyola University Maryland. He is the author of several books, including Thomas Aquinas: Faith, Reason, and Following Christ (Oxford University Press), Catholic Theology: An Introduction (with James Buckley, Wiley Publishers), and The Deacon’s Ministry of Liturgy (Liturgical Press).

Josephine (Phina) Borgeson was ordained deacon in 1974 and serves in the Episcopal Diocese of Northern California. Her community work centres on food system ministries and related environmental concerns, including interfaith networking and consulting. She is involved in ministry development and education, mentoring new deacons and teaching those preparing to be deacons. She is a past president of the North American Association for the Diaconate.

Rosalind Brown, after a few years living in the United States, during which she was ordained, trained people for ordination in the United Kingdom. She was a Residentiary Canon at Durham Cathedral from 2005 to 2018, where she had oversight of the nave, or public, ministry of the cathedral. Prior to that, she chaired the Diocese of Salisbury’s working party on the ministry of deacons, edited the Salisbury report on the Distinctive Diaconate, and is author of several books on ministry and preaching, including Being a Deacon Today (Canterbury Press, 2005).

Brian A. Butcher, a sub-deacon in the Ukrainian Greco-Catholic Church, is Lecturer and Research Fellow in Eastern Christian Studies in the Faculty of Theology at the University of St Michael’s College (Toronto School of Theology). He is part of the Metropolitan Andrey Sheptysky Institute of Eastern Christian Studies. His second book is Liturgical Theology after Schmemann: An Orthodox Reading of Paul Ricoeur (Fordham University Press, 2018).

David Clark became a member of the British Methodist Diaconal Order in 2005. Prior to that, he worked as a Methodist minister in Sheffield and London and as a senior lecturer in community education at Westhill College, Birmingham. He played a leading role in the emergence of the Christian Community Movement, set up the Christians in Public Life Programme, and founded the Human City Institute. His latest book is The Gift of a Renewed Diaconate—and the Contribution of British Methodism (FastPrint Publishing, 2018).

Susanne Watson Epting was ordained deacon in the Episcopal Church of the USA in 1989. She served as a board member of the Association for Episcopal Deacons for eight years and as its director for ten. Active over many years in ministry development, she became an assistant to the bishop, working with individuals and congregations. Her book Unexpected Consequences—The Diaconate Renewed was published by Morehouse Publishing in 2015.

Gloria Marie Jones, OP, served eleven years as Congregational Prioress for the Dominican Sisters of Mission San Jose, an international Roman Catholic community with sisters in Mexico and the United States. She received her MA in Religious Studies from the Catholic University of America and served the Catholic Community at Stanford University as Director of Faith Formation and Chaplain. As the daughter of a deacon, she brings keen interest to the question of diaconal ministry in the Church today.

Anne Keffer was consecrated a Lutheran deaconess in 1964. As Director of Christian Education and Youth Ministry, she served large urban congregations in Ontario and a rural team ministry in Nova Scotia. Receiving her MEd in Counselling, she was a university chaplain in Saskatchewan and Ontario. While she was the Executive Director of the Prairie Centre for Ecumenism in Saskatoon, she was called by the Deaconess Community, ELCA, to be its directing deaconess in Chicago, where she served for seven years.

Maylanne Maybee has been a deacon in the Anglican Church of Canada since 1978. She is an educator, social justice activist, ecumenist, and writer on the diaconate and ecclesiology. She was Principal of the Centre for Christian Studies, a theological school in Winnipeg for diaconal candidates, and is now Interim Principal at the United Theological College in Montreal. She edited and contributed to All Who Minister: New Ways of Serving God’s People (ABC Publishing, 2001).

George E. Newman, ordained to the Roman Catholic diaconate in 1987, served as Director of Diaconate Formation in Toronto from 1992 to 2002. He established a diaconate formation programme in the Diocese of St Catharines in 2003, retiring from this position in 2017. Deacon Newman currently assists Newman Theological College in Edmonton as instructor in diaconate programmes. He has assisted with the establishment of diaconate programmes in a number of dioceses.

Alison Peden was a medievalist at St Hilda’s College, Oxford, before moving to Scotland in 1990, where she taught at the Universities of Glasgow and Stirling. She trained in the Scottish Episcopal Church and at Edinburgh University for her ordination in 2002. When serving as Rector of Holy Trinity, Stirling, she became involved in the formation of ordinands. She was appointed Provincial Director of Ordinands in 2011, with oversight of recruitment and selection for ministry throughout the Scottish Episcopal Church.

E. Louise Williams is a deacon in the Evangelical Lutheran Church in America and was consecrated a deaconess in 1967. After serving in parish ministry, she served on the staff of the Lutheran Deaconess Association (LDA), retiring as Executive Director in 2008. She is past president of Diakonia World Federation and Diakonia of the Americas and Caribbean. She teaches Theology of Diaconal Ministry at Valparaiso University in Indiana.

2 thoughts on “NEW BOOK ON THE DIACONATE”